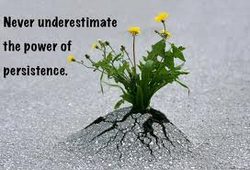 “Continuous effort – not strength or intelligence – is the key to unlocking our potential.”  Winston Churchill

Remember his famous quote, “Never, never, never give up.”

In the book, “Think and Grow Rich,” the author Napoleon Hill has a whole chapter on persistence.  The chapter’s title states that persistence is, “The sustained effort necessary to induce faith.”  Faith that the time is right, that we have the ability or that this is what we want to do.  He says that lack of persistence is one of the major causes of failure, and the ease that it may be conquered will depend on the intensity of one’s desire – what we now talk of as your WHY!

He lists 16 ‘Symptoms of Lack of Persistence,’ and talks of them as habits.  Procrastination, indecision, blaming others, lack of goals and plans, wishing, and fear of criticism are some on the list.  It might be time to look at what habits are keeping you from persisting when you know you should continue to move forward.  What limiting beliefs are sustaining these habits?  Hill talks about the discipline necessary to keep on going when the chips are down.  I would love to hear from anyone about the undesirable habits you have, that are preventing you from persisting until the end. 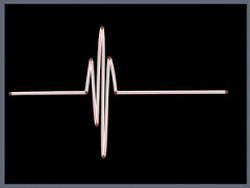 “If there are no ups and downs in your life, it means you are dead.”

A few years ago I was doing a trek in Nepal, and on the first day we were walking along the valley floor and the guide pointed upwards and said, “That’s where we are staying tonight.”  My heart sank, to see the height of the hill/mountain we had to climb.  But there was no alternative and we had chosen this particular route so that we could see the sunrise from the ‘top of the world,’ the next morning.   And what an experience that was, with hundreds of others from all parts of the world, joined with one common exciting purpose.  So the contrast was amazing! Yes it would have been easier to just walk along a flat path, but we would never have had that fantastic experience.

Life is also like that.  How do we get the contrast of light and shadow, of good times and ‘bad,’ if we only ever have one basic experience?  Life would become monotonous.  The rich tapestry of special moments wouldn’t be treasured, if we didn’t have some challenges to gives us the contrast.  Maybe even some pride in ourselves when we have overcome something that perhaps we didn’t know we could do.  It takes acceptance of both the good points we have and the points we would rather hide, to make us who we are and what we have to offer the world.

Enjoy staying alive with both the ups and downs in your life!   Robyn 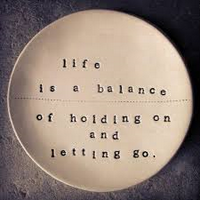 “All the art of living lies in a fine mingling of letting go and holding on.”  Anon

In the Chinese Medicine energy system, the Lung energy is associated with the emotion of grief.  If the Lung energy is balanced there is a healthy level of taking on the new and being able to let go when it is appropriate.  We usually think of grief as being associated with a death but it can be the end of anything, a relationship, a job, children leaving home, a change of address etc.  We may need to actually grieve when we have to let go of something we are attached to or have known for so long that it has become part of who we are.  The stronger our Lung energy is however, the sooner we are able to get back to some sort of equilibrium.

If however we struggle to let go, we may hold onto old ways of thinking, old ways of doing, old ways of feeling, old ways of being and believing, which no longer serve our highest good.  So it is appropriate that the Lungs are associated with this energy of accepting and letting go, just as they accept in oxygen and let go of carbon dioxide.  If you can think of the lungs as a container that is letting go of the cloudy stale air and accumulation of all tension, and then taking in beautiful clear air that is full of energy and vitality.  Now link that association with life’s dramas and traumas and relax as you breathe out and let go before expanding your chest as you breathe in the new life-giving force.  This represents the cycle of life, just like the tides of the sea.

Enjoy taking on and letting go as appropriate!   Robyn

“Don’t wait for the perfect moment.  Take the moment and make it perfect!”  Unknown

This quote is reminding us all that we have the ability to be co-creators of our future.  We are all vibrating beings and the vibration we give out to the universe, by law, attracts back to us something of a similar vibration.  So in every moment we are creating our future.  Even something as simple as getting ‘out of bed on the wrong side,’ can determine how our day is going to go, if we let it.

The Law of Polarity states that there are 2 sides to everything.  We can’t have an up without a down, a front without a back etc.   If a situation appears to be ‘negative,’ there will be a perfect moment on the other side if we look for it.  So every moment has the potential to be perfect, but it is up to us to see that potential, to look beyond the challenges and barriers that crop up.  Focusing on the challenges will only attract more of the same.  How about having the intention to have a perfect day!  Challenges will still crop up, but our attitude to expect that we will come up with a perfect solution will create those perfect moments!